The popular children character Totoro may look very cute in the interior of nursery, not to mention the joy that he is able to give your child.

Make Totoro stuffed toy with their hands is not difficult. And today we see this.

Step 2. Attach to the cardboard template and cut out cardboard blanks. With them easier to work with than tissue paper.

Step 3. The carton blanks apply to pieces of felt appropriate color and stroke a path with a pen or pencil. Template hands, ears, tail and trunk in one instance place on one piece of gray felt.

Step 4: Cut out pieces of felt blanks stomach and eyes, as well as the characteristic for Totoro contrasting stripes.

Step 5. Fix Pieces of gray felt (both, with or without circled patterns) with sewing needles. Carefully cut, leaving a seam allowance.

Step 6. Black thread to sew the pupils on the eyes of toy and stripes on the belly.

Step 7. Use beige thread to sew belly the Totoro’s body.

Step 8. White thread sewn to the body of the eye. Black thread – nose.

Step 10. Sew together the ears, hands and tail with black thread, leaving place for stuffing these parts filler.

Step 11. Turn pieces inside out and stuff them filled.

Step 12. Sew the body of Totoro and pin ears to his head. However, you can sew them later – with his hands and tail. In the lower part of the body leave for stuffing.

Step 13. Turn inside out the body of the toy. Fill it. Check the stability of Totoro. If all is well, sew the hole for stuffing. 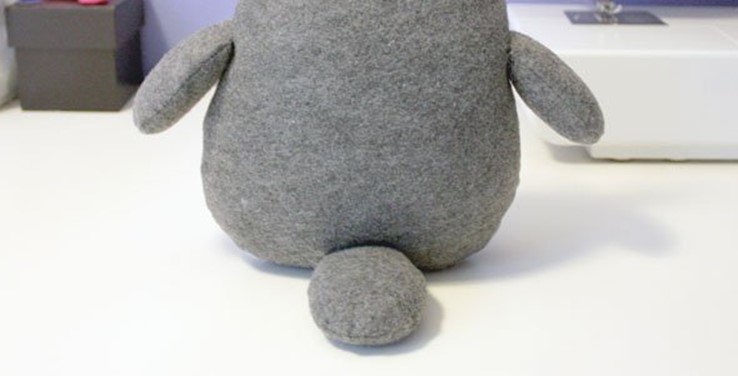