Dreamcatcher is a talisman that has long been used by the Indians of North America. Considered that Dreamcaster has the ability to protect you from bad dreams and good dreams makes vivid and memorable. If you want to make your dream of a light, get rid of it nightmares and simply freshen the Interior of the original ethnic decoration, try yourself make such charm and hang the headboard. In our time is a snap to buy a ready-made Dreamcatcher, but made with your own hands, with soul and good intentions, it will surely bring more happy dreams. Moreover, it is not difficult to do and not expensive. In this article, I show you how to make a dream catcher with your own hands. 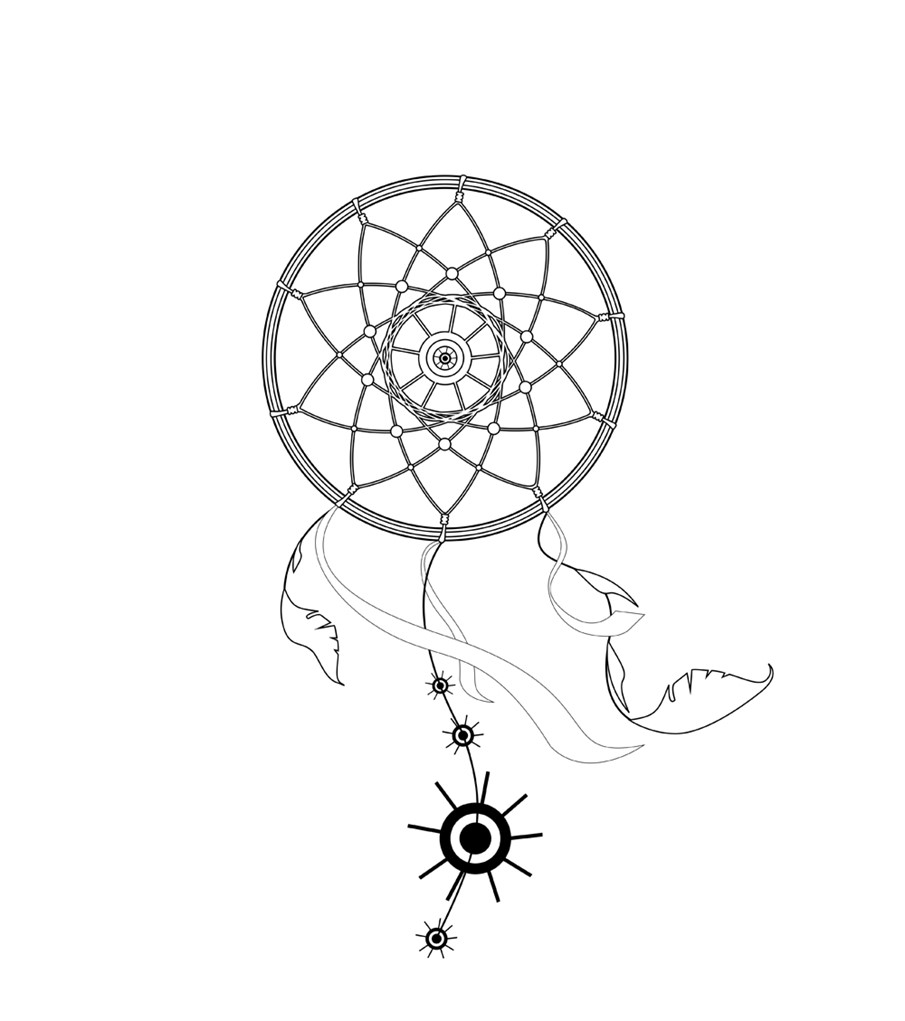 An ancient Indian legend of Dreamcatcher

It was long ago, when the world was still young, and the people lived in harmony with the forces of nature. The elder shaman of Lakota tribe ascended the mountain, and he had a vision. Wisdom teacher Iktomi came to him in the guise of the spider. While they were talking on the hidden language, the spider took willow twig bent into a hoop, embellished feather birds, beads and began to weave around the web. He told the old shaman about the cycles of life: a child is born, and it is taken care of adults, then grows up, and he takes care of new babies, and so continued endlessly. Willow hoop symbolizing the human way of life, everything in nature is in a circle. At different points in our lives we are faced with various forces, some of whom want to help us, others on the contrary be harmful. If a person has good forces, they will be happy to take it in the right direction. If the choice is wrong, then the person is suffering and will get trapped. Everyone chooses their own path. Spider continued to weave a web, while saying only a small hole left Centre. Look, he said, it’s a perfect circle, use it to help your people achieve their goals, drawing on ideas for them from the visions and dreams. If you will trust the great spirit, kind thoughts and dreams will come to you, evil does get confused in the web and melt with the first rays of rising sun. 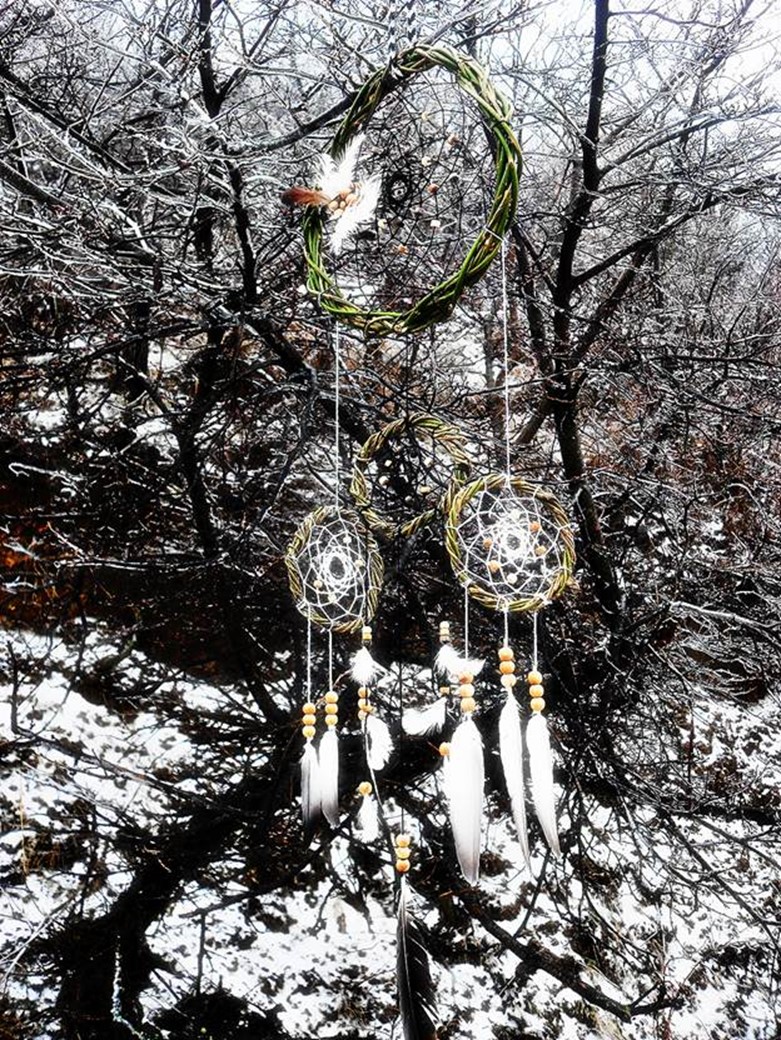 The old Shaman handed the talisman to his people, and since then, many Indians hang Dreamcatcher over bed, making sure its ability to filter out all the bad and keep the good.

Ideally, you should only make Dreamcatcher made of natural materials, using willow thin twigs, thread of natural origin (the Indians instead of yarn were deer sinew), wooden Clay beads and feathers or live birds-Eagle or owls. Feather symbolizes the air and sends to the owner of the mascot bird, for example, the ability to see in the dark. Nowadays, of course, it is difficult to find the feathers of an eagle, so fit and more mundane materials.

Even if you do not bring special meaning to the ancient legends, Dreamcatcher is just beautiful and contemporary ethnic decoration, decor and color scheme that you can choose based on from your existing environment. 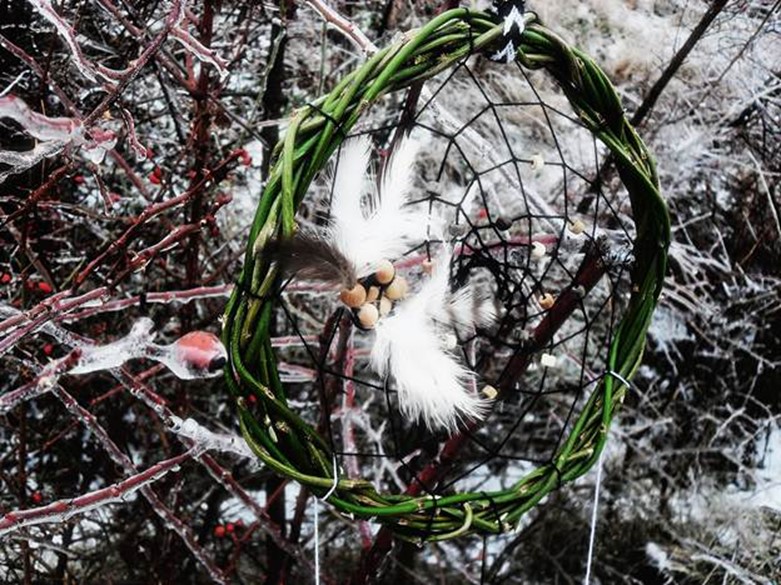 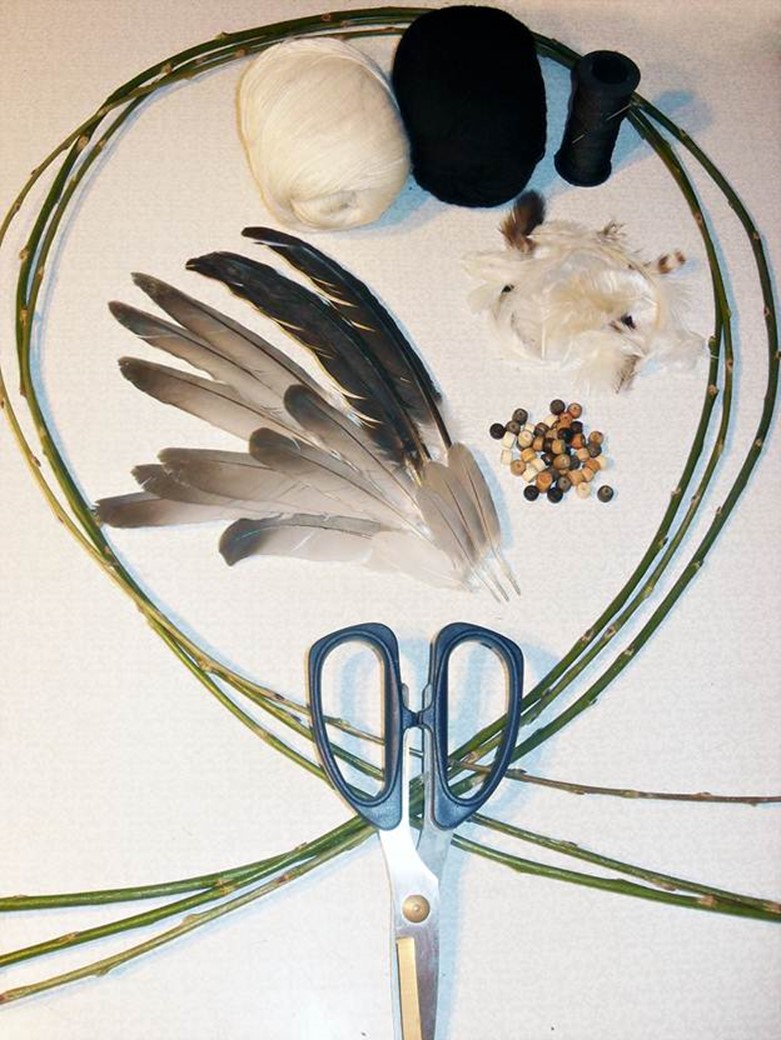 How to make a Dreamcatcher

From willow twigs make the hoop, the desired diameter. Initially, make a circle, starting with the thick end of the rod, then it should be twisted the whole branch. You can use multiple branches, this will make the framework more robust and less prone to strain when tightening the threads. 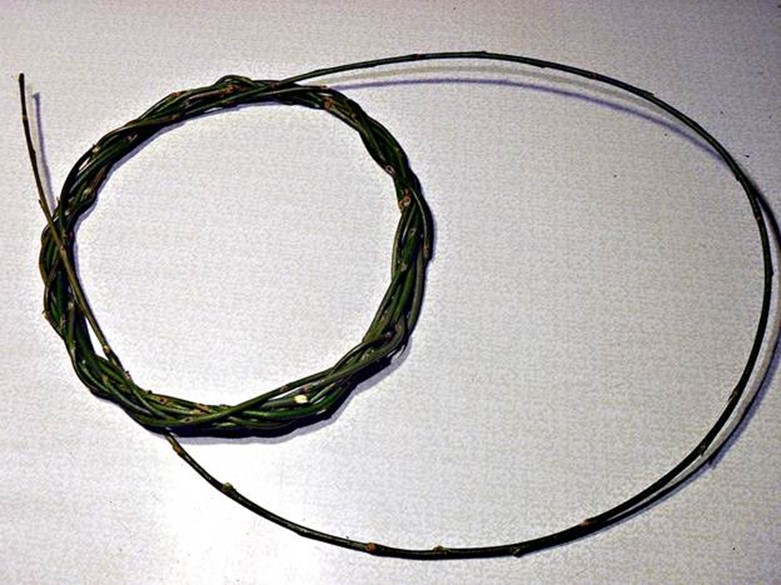 If not managed to find willow, you can take a wooden Hoop, for example, the inner part of the embroidery hoop. The hoop better wrap around leather or lace thread. Willow is not worth the wrapping, it and non-it looks very beautifully and naturally. 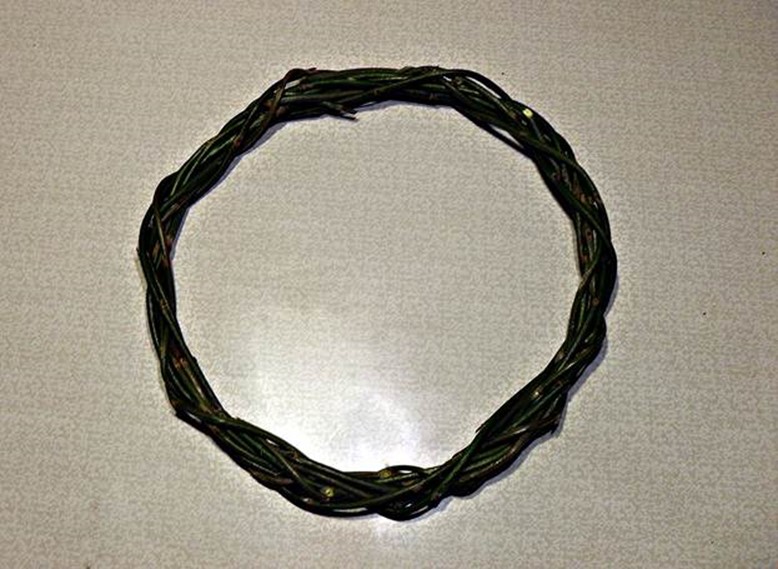 For the manufacture of large catcher of dreams, we will need a few willow circles in various diameters, the biggest will be the main, and little will be placed under it. In my work big catcher has three small rings. 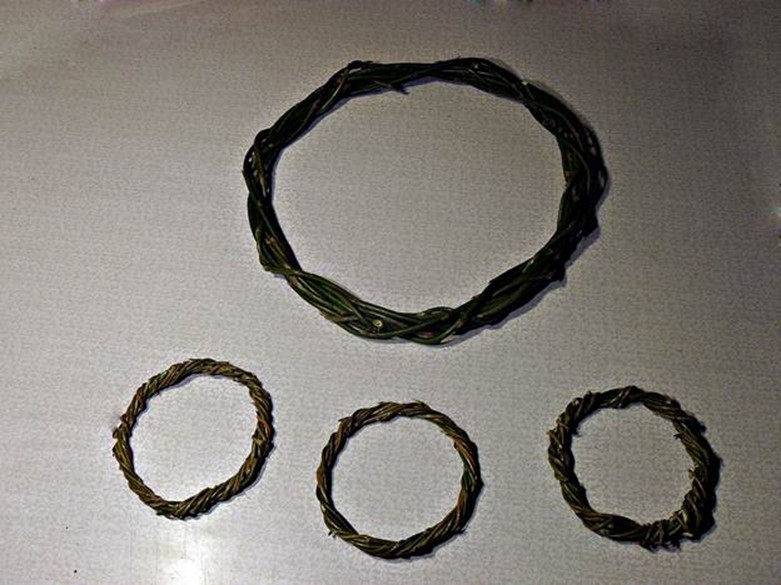 When the stem is ready, take the skein of yarn. Color choose in its sole discretion, that a special symbolic meaning does not have. Should all work the thread is not interrupted, so it is better to take enough big hank. With a diameter of 8-12 inches (20-30 cm) base, it would take about 12-14 feet (4-5 meters) of thread. 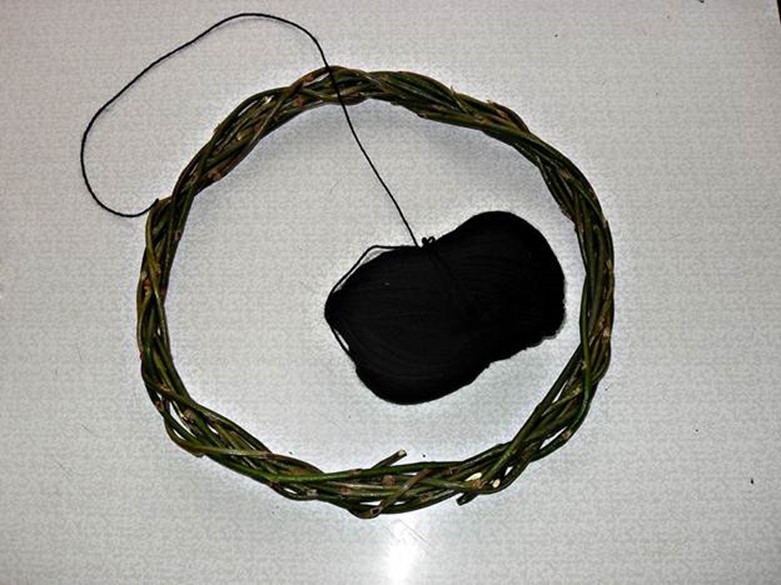 Having fixed the thread around the hoop, we wind it several times and have started new node. Leave a loose end, it will need to secure a finished product. 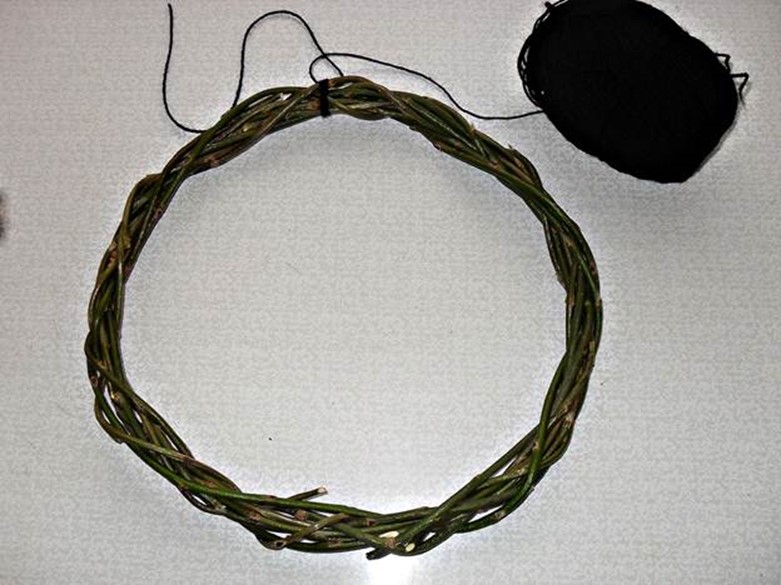 Are beginning to make a spider web inside our rings. Take the thread and, departing a short period from the main node, free and not dragging, put it through the top of the ring. 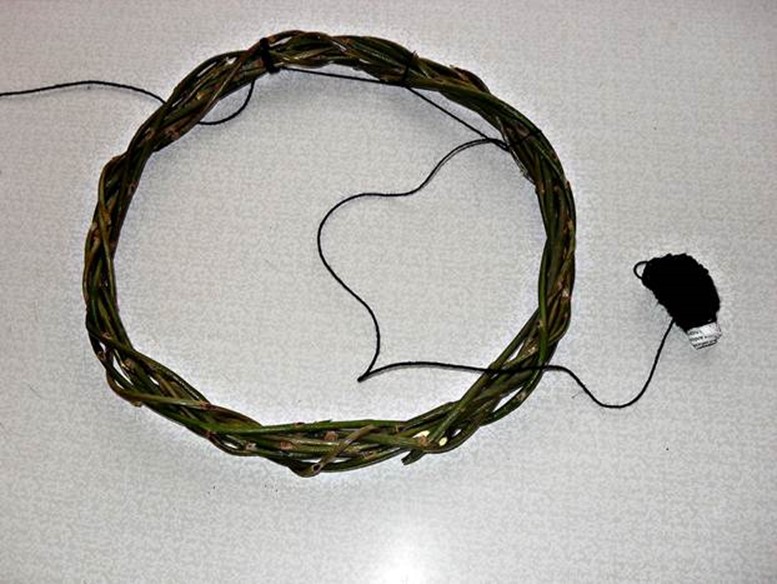 On the reverse side are the thread and puts it into the left eyelet. 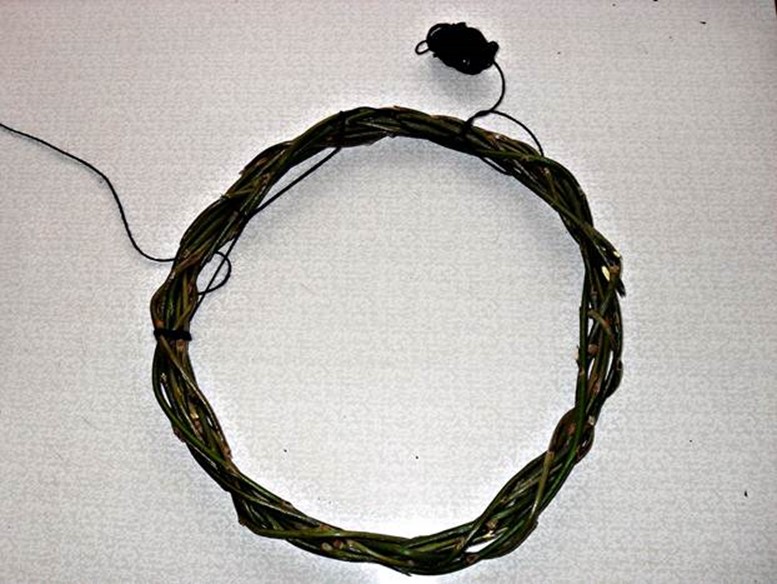 When performing the work do the same simple nodes. 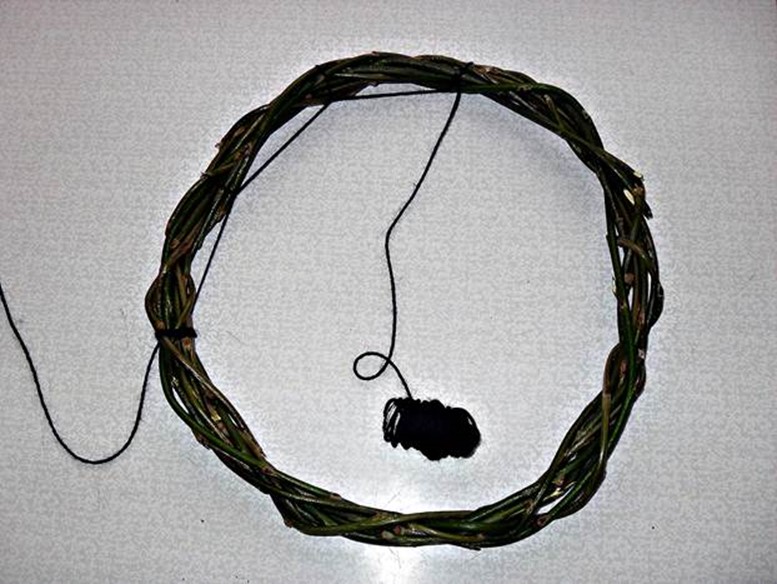 Retreating equal intervals, throughout the entire diameter of the base, delay nodules. Tie is not tightened too tight, but not to break the thread and not deform willow frame of catcher. If you have a small Dreamcatcher, if possible, make 8 knots, it symbolizes 8 foot spider spin a web. When a large amount of knots can be an arbitrary number of more odd. The last time between the knots is to do a little less than the other. 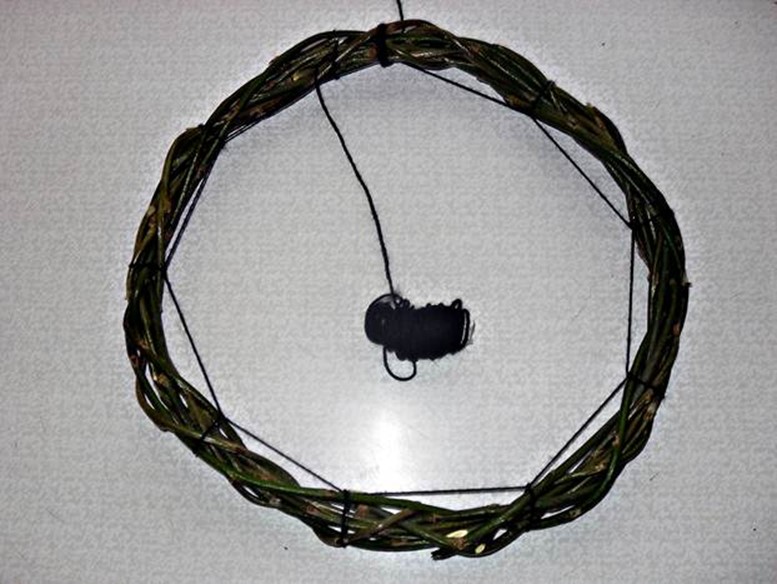 After the first round, put thread on the straight cut of the thread between the first strained the knots and doing eyelet exactly centered. Make a knot. 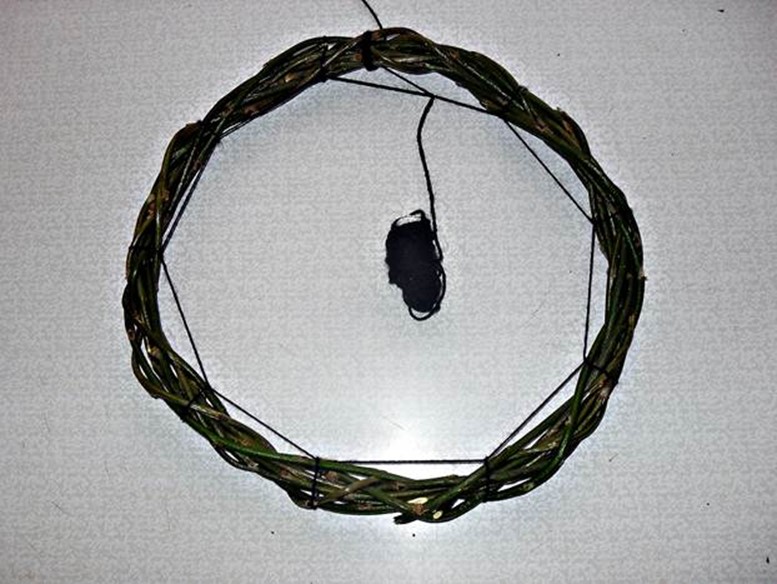 Each loop will be centered on the previous row of loops on it.

If it is good enough and tightly tensioned, the mesh of the loops will delay it to resemble a real symmetric web. 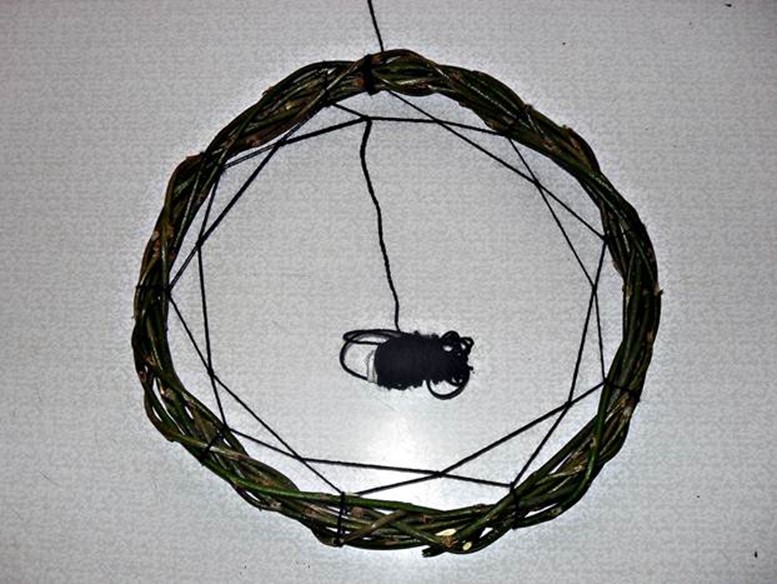 The third round is add beads. They symbolize the dew which stayed on the Web. Great wooden beads or rosaries from juniper, which can be bought in gift shops. Insert the thread into the needle and pull the bead with it on its place. 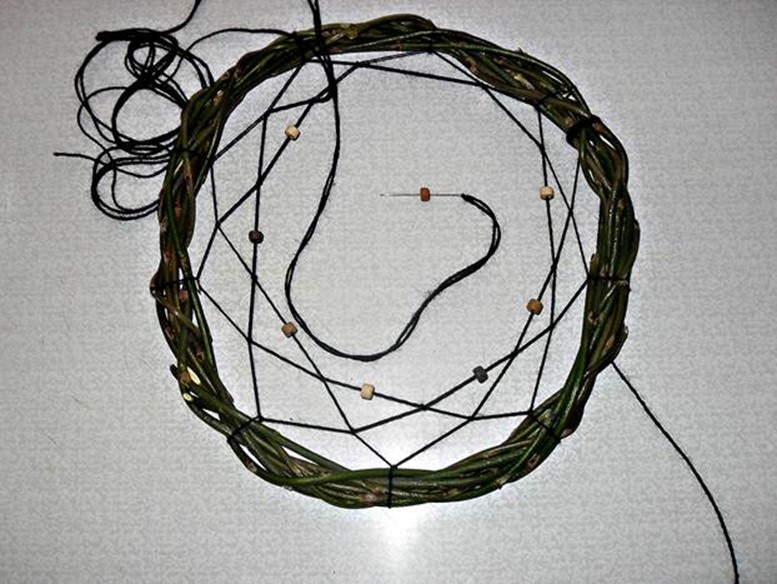 After establishing a node, as usual, repeat to the end of the series. After making a few subsequent rows of eyelets, you can repeat the row with beads. Or just post them to your liking, in no particular order. 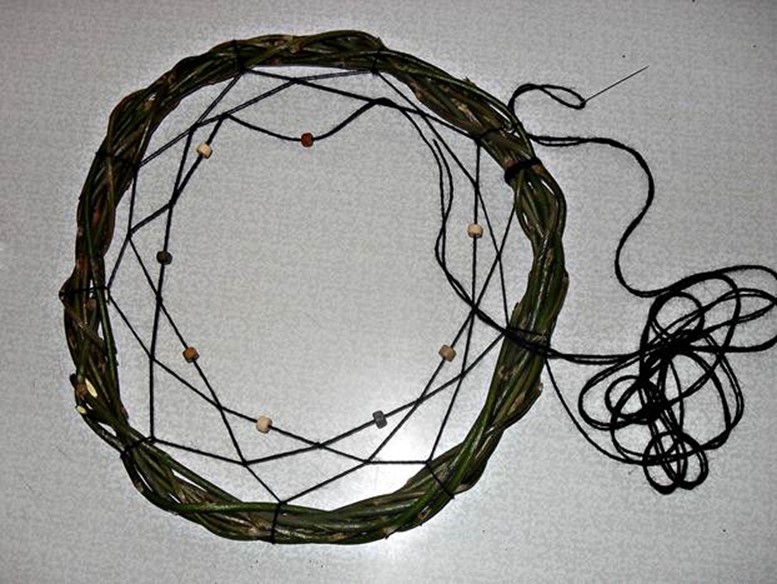 The diameter of the circle petlel′ will become less and less. In the Centre it is necessary to leave a small hole, well having fixed the last node and afterwards the rest of the thread. 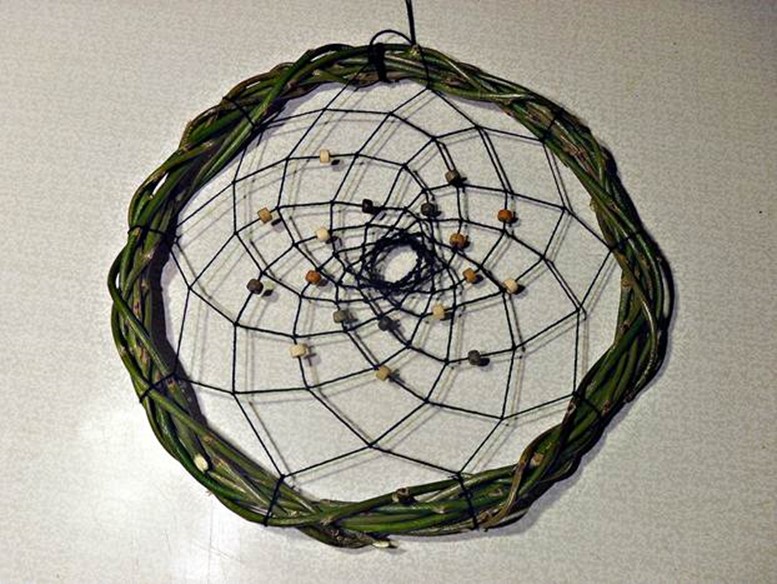 In the same way we make neat Spider Web and small foundations. You can use yarn of other colors that are beautifully combined with the base color. 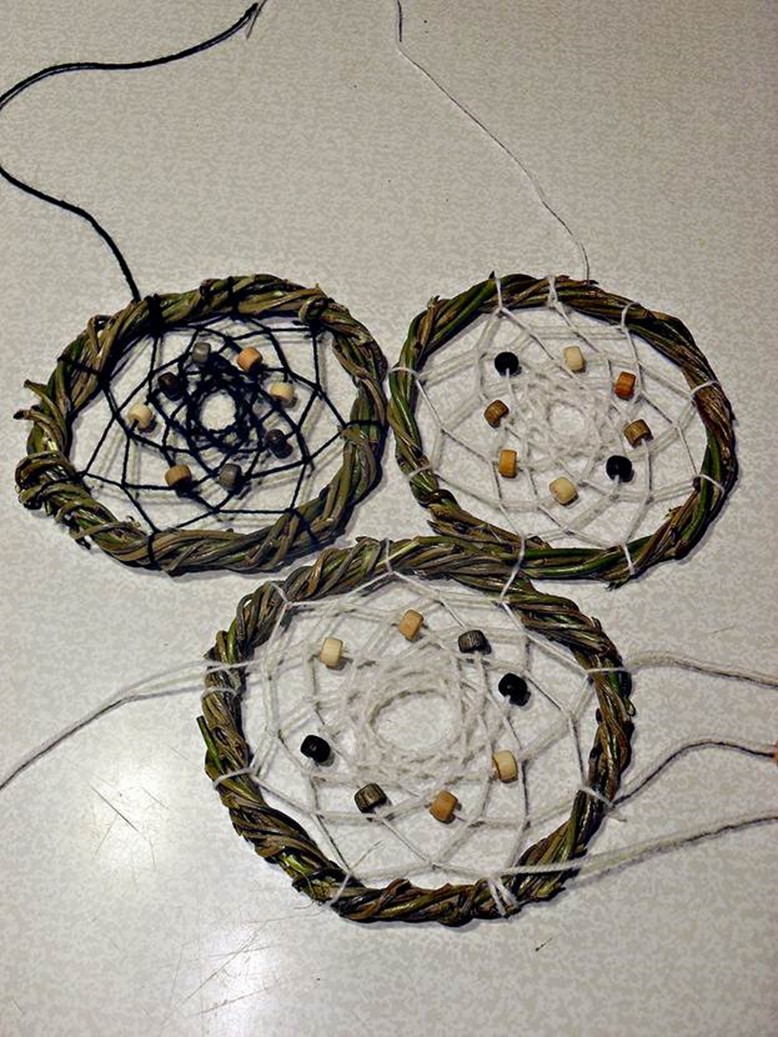 Make the ornaments of feathers. Let’s take a small basis, several large feathers, beads and thread the needle. If you wish, you can paint feathers in bright colors and be sure to disinfect, if they were not bought in a store. 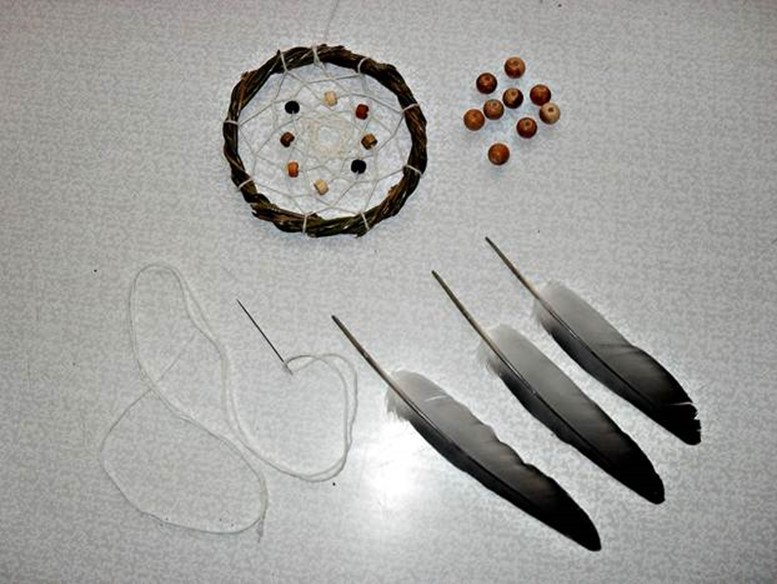 In the center of the rod pen make a small hole with a needle and thread, extend the end of the anchored node. Next we put the beads on a thread and get them down. Beads close rod pen and give it a more aesthetic appearance. 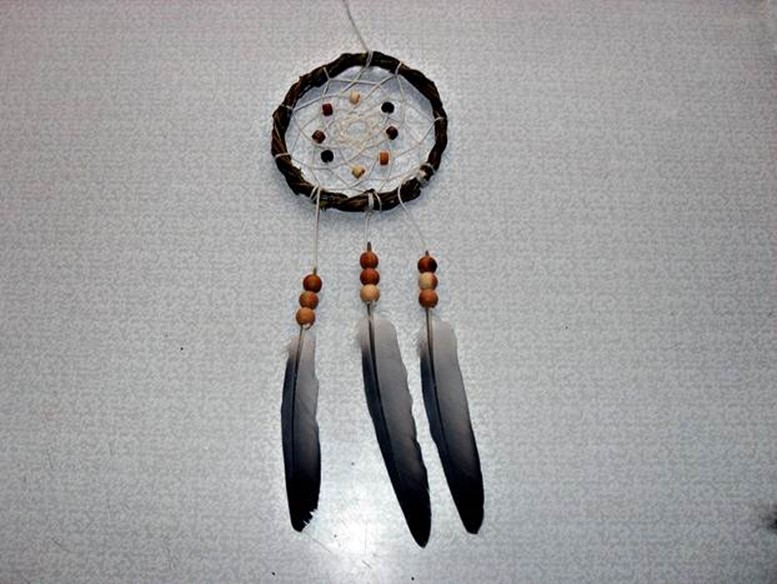 Need more of these pendants from the beads and feathers, which then will assign to each of the little basics. You can also make a suspension of small bright feathers, tell a thread the ends of each and shielding his knot bead. 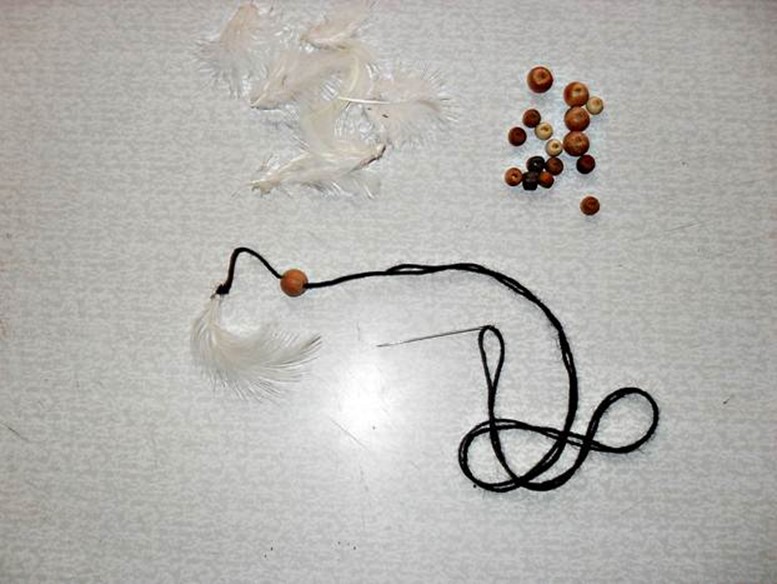 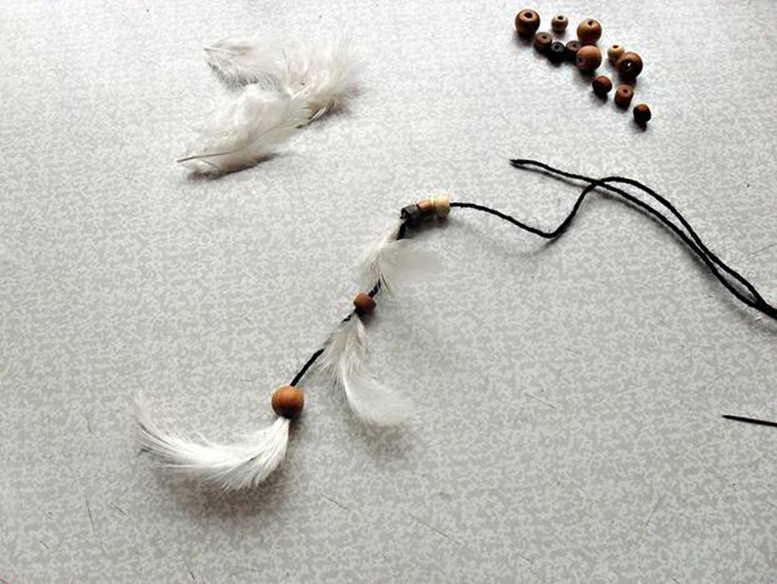 Ther’s a lot of options for decorating a Dreamcatcher, everything depends on your imagination. Looks interesting, if you put on the web a little spider of beads and feathers or other suitable materials. 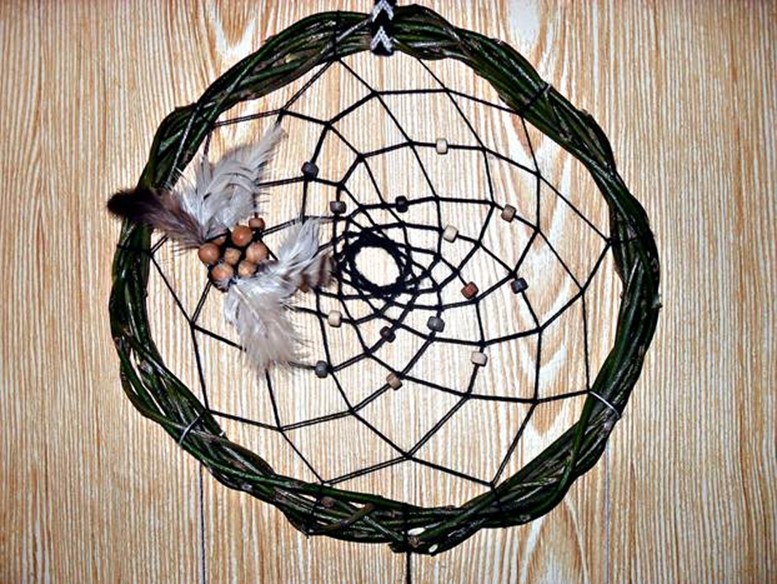 The last stage of production is the assembly of finished catcher of dreams. That would hang over the bed, a mascot will loop. This can be a simple thread, leather lace, braid or fabric woven from threads of woven rope that we used. 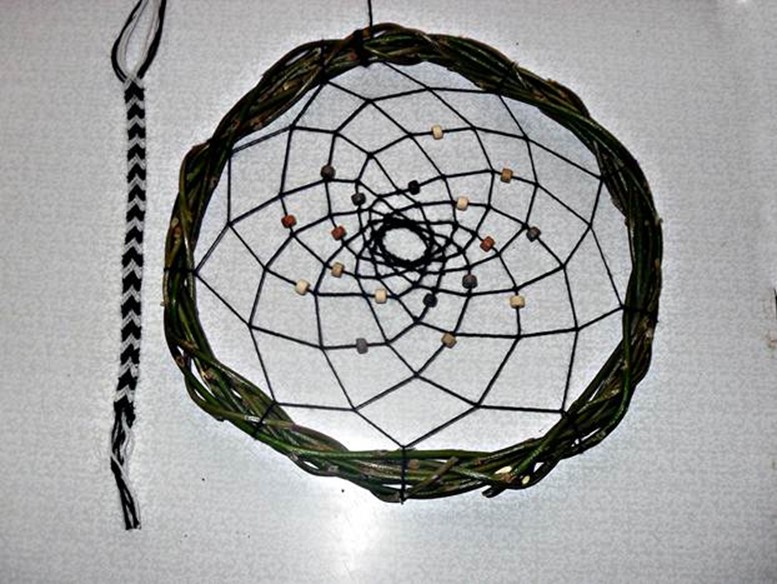 Secure it at the top of the main great catcher, well covered and connected to the free ends of the strands, which initially left. 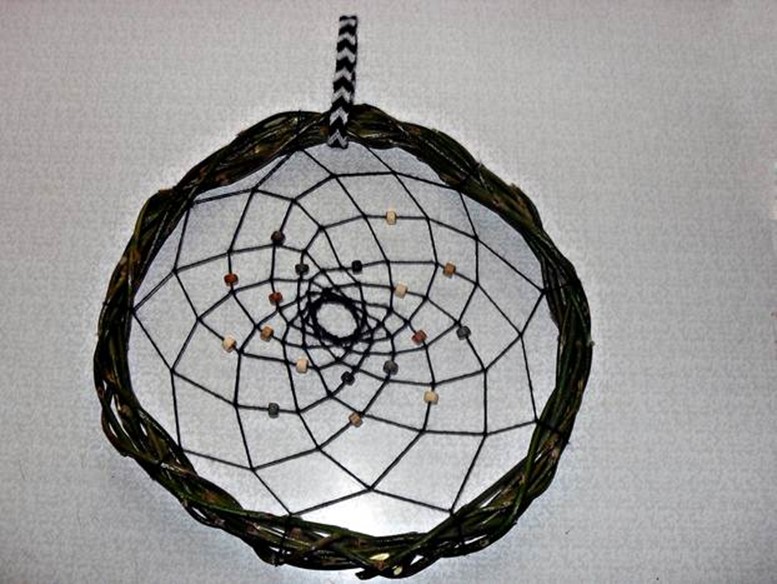 Mount the small dreamcatchers on willow hoop of primary. Place them beautifully and symmetrically to each other, possibly at different heights. 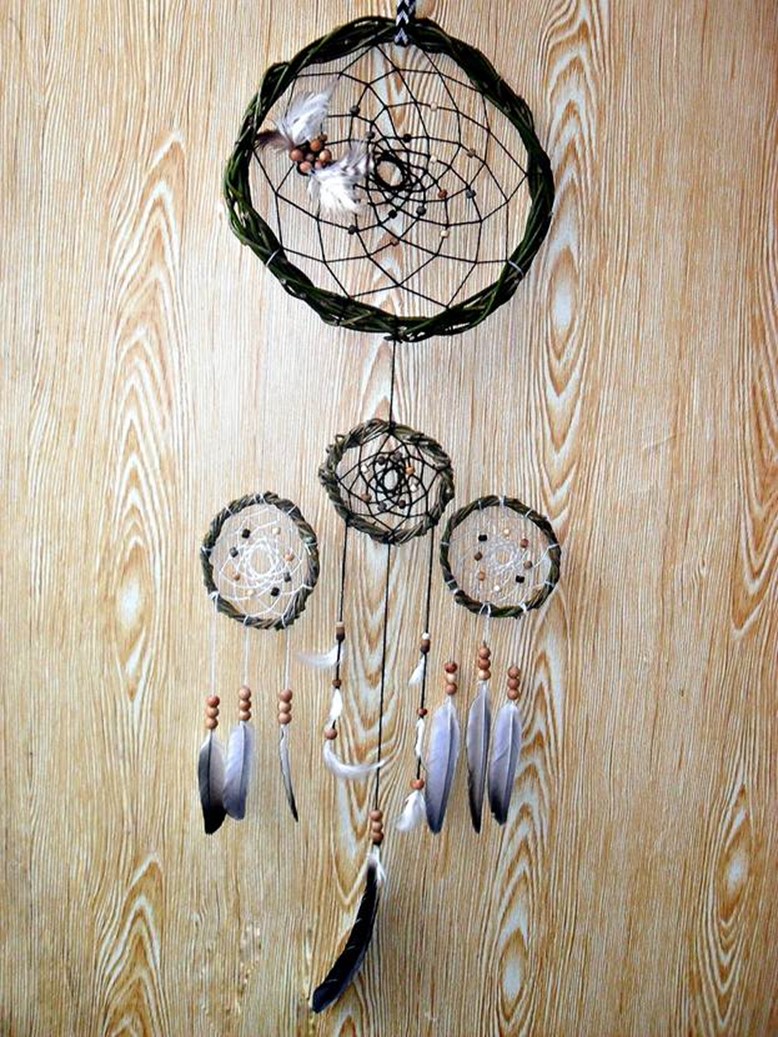 Our ward and ready. You can hang it over the bed and falling asleep every night to know that you will see only good dreams. Because everything bad disappears with the dawn itself, the catcher does not require special care. But still good it sometimes make on air, the bright sun, maybe it will help him work with the forces of nature?)

Success to you and have a nice dream, so much so that in this technique it is possible to make not only the Dreamcatcher, but the original ethnic jewelry.