Can I connect the opposites: the lightness of thin metal and the severity of the Web, the tenderness of lace and feathers, armor strength of Indian and medieval knights armor? Would you say no? And that’s not right! With a good imagination and fantasies all of these opposites are organically intertwined and create unique and beautiful jewelry.

Dream catcher and chain armor have in common is that they both are used to protect the only catchers – for energy, and chain mail – for physical. Suggest you make an unusual ethnic jewelry – pendant of metal, pattern, which resembles ancient Indian amulet.

Recently, we have already made earrings Dreamcatcher. You can wear these jewelry together or separately. 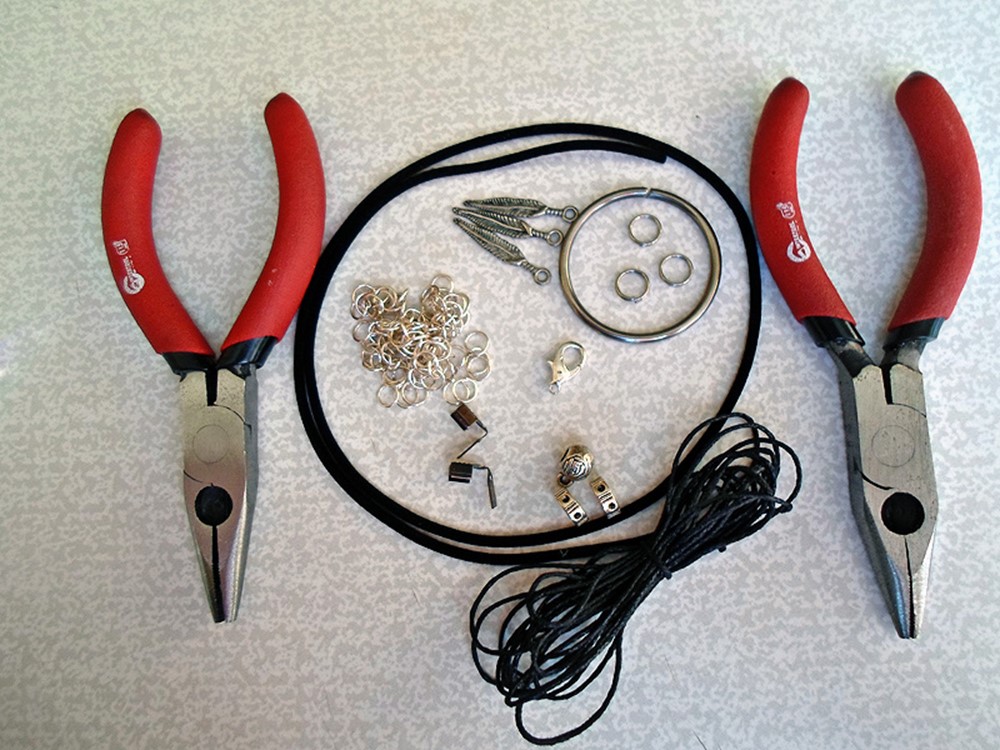 How to make handmade pendant

Making a pendant begins with a hike in the craft store where purchased all the necessary materials. The diameter of the ring basis must be in 5-6 times larger than the small rings

it is possible to make rings of wire itself. Spiral cord is fully wind the cord ends, make a double knot. 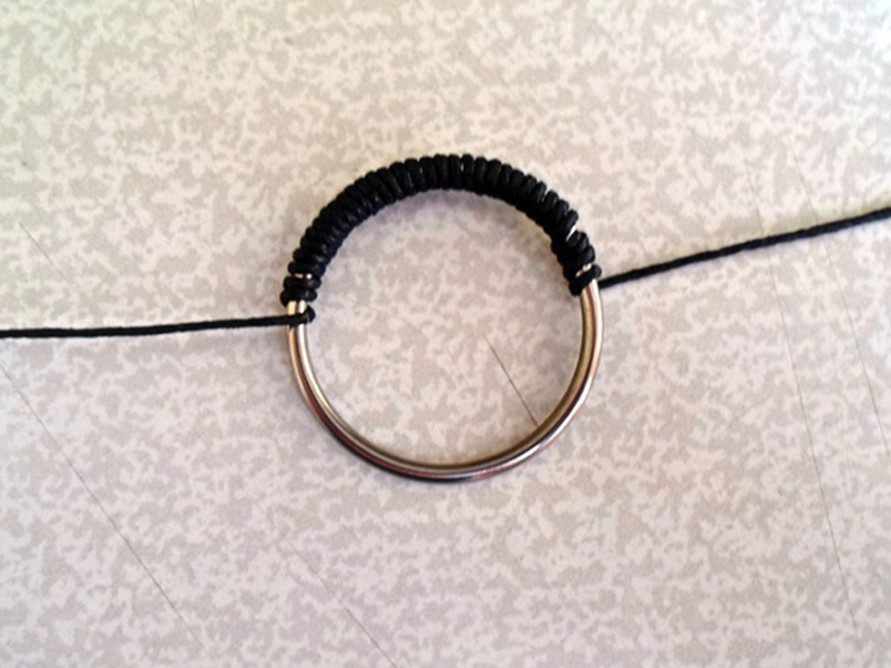 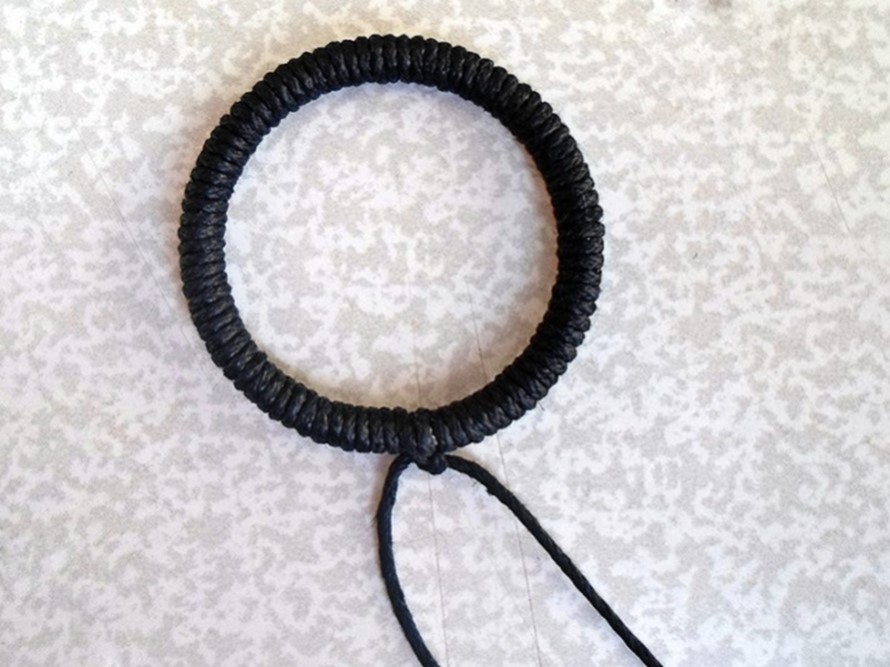 Unclamp the required number of rings using pliers. It will be easier to work with later. 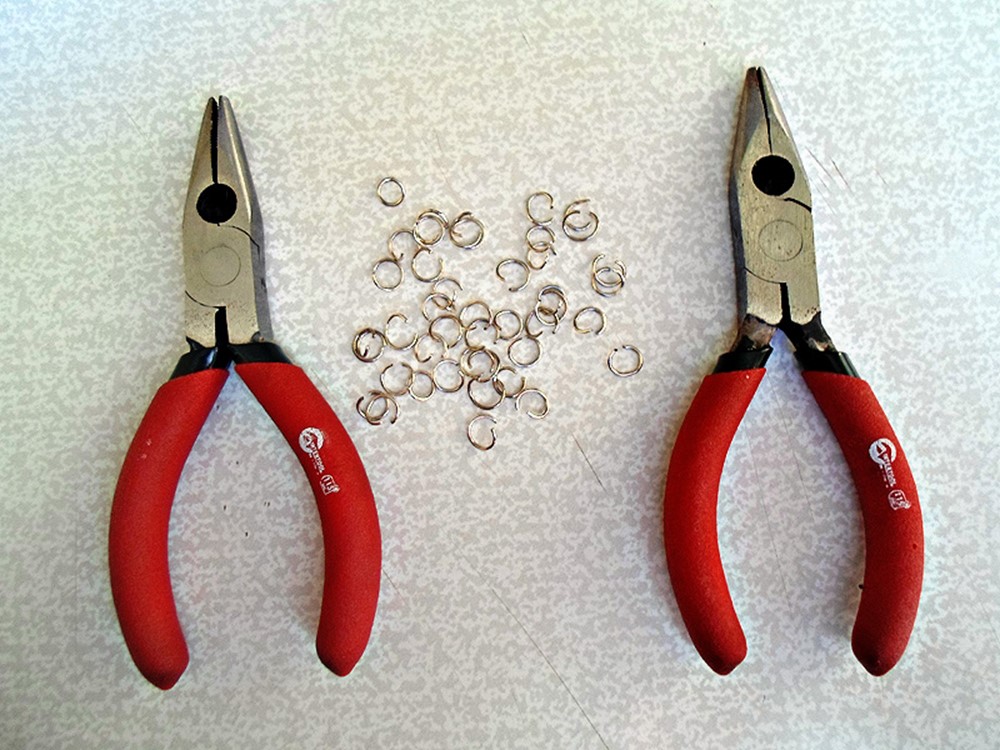 Put unclamped rings on the ring basis and tightly close them. This will be the first row of weaving. 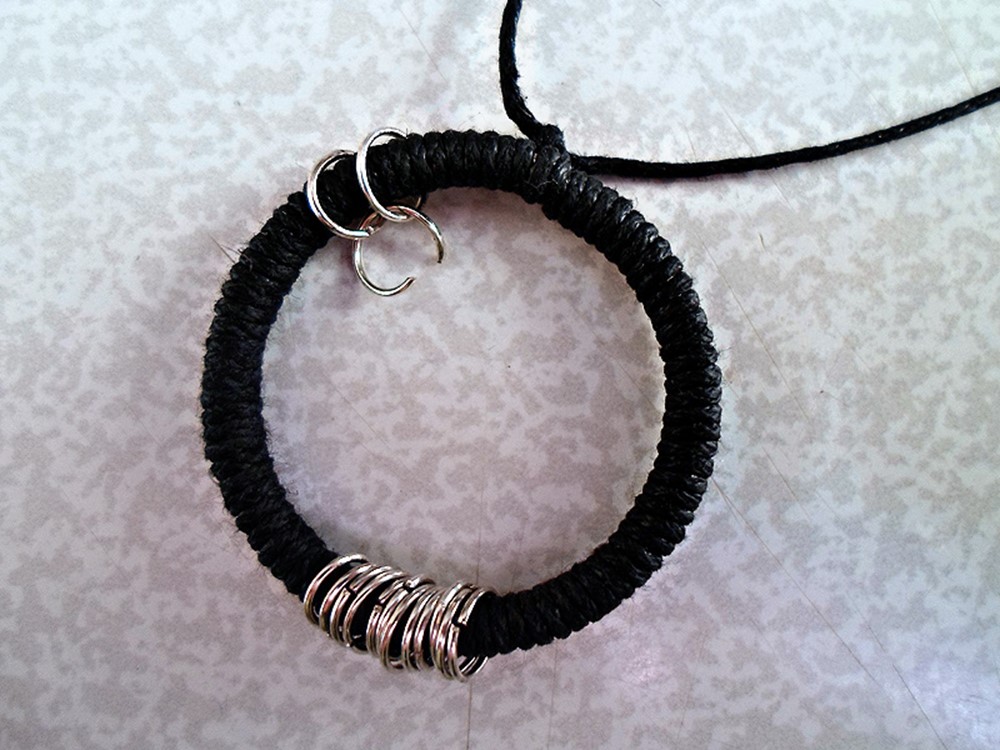 Two connecting rings placed between them, another through them, as below. This will be the second number. 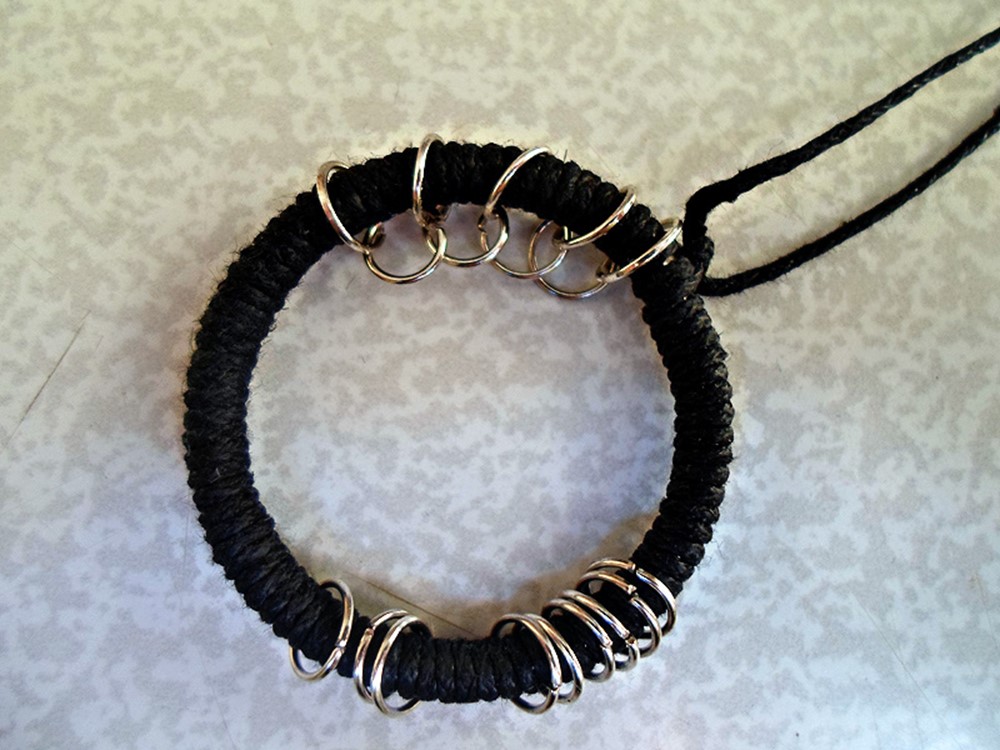 You need to move in the same direction, so that the edge of the one ring was lying on top of each other everywhere. 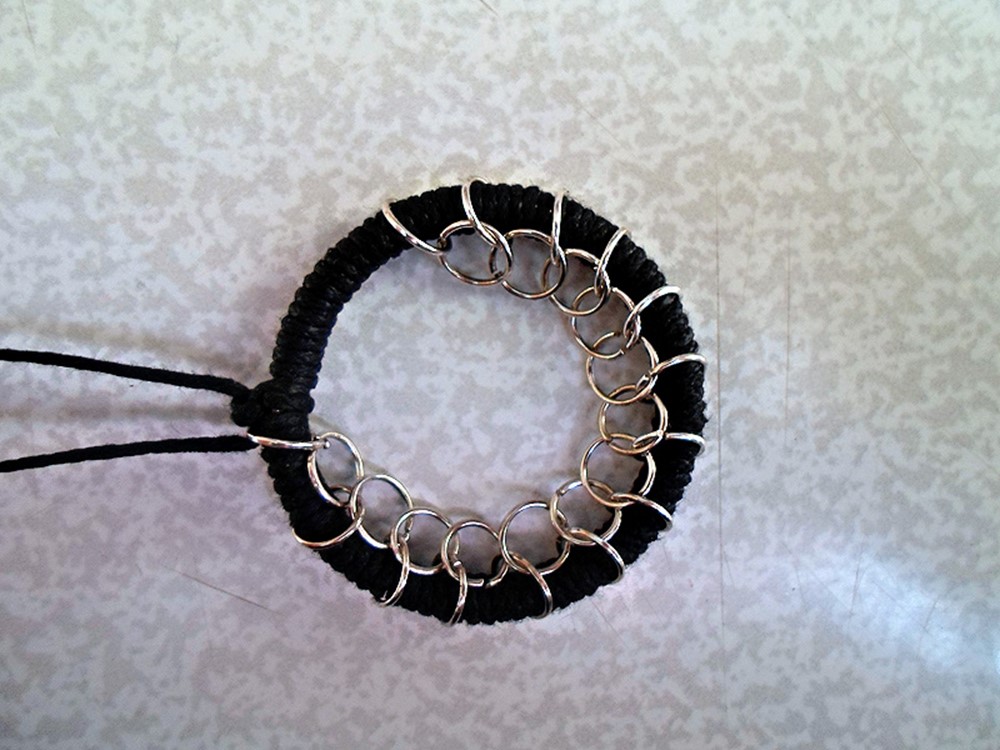 Either from right to left, or vice versa, it’s no difference. Thus, completely pass circle and at the end of the link the first and the last ring, closing it. 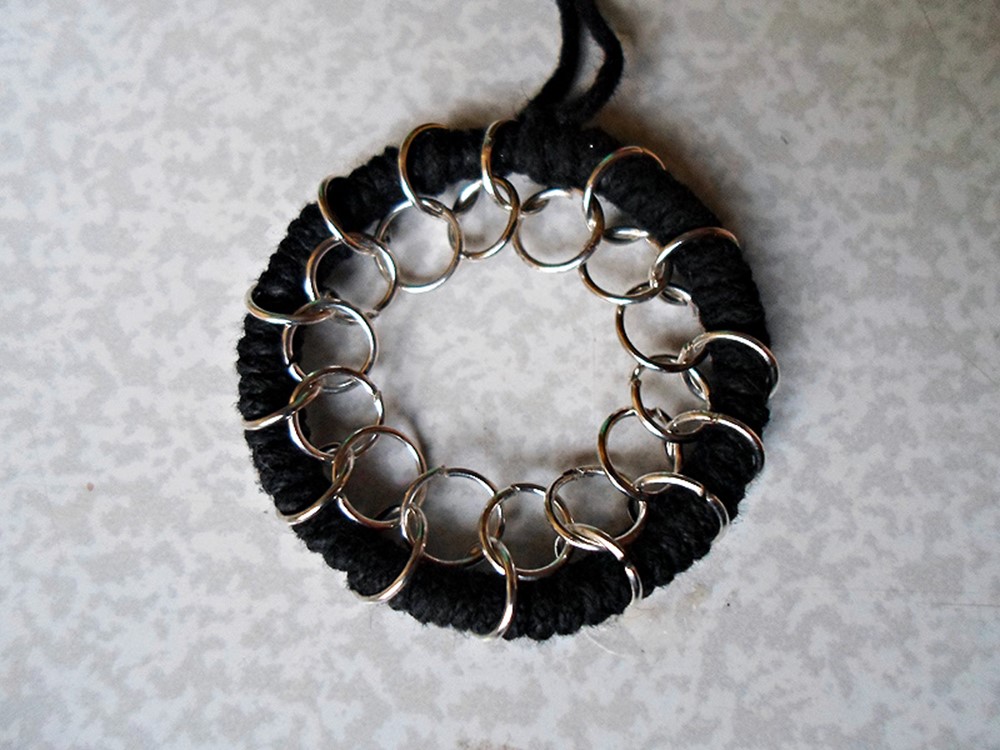 Stick ring of third row into the crack at the junction of the two rings of the second series, as well as dual ring, which would subsequently will fix all of the rings for the third series. The dual ring tensile withstand great pressure and not deformed, so the center of the pendant, it fits perfectly. 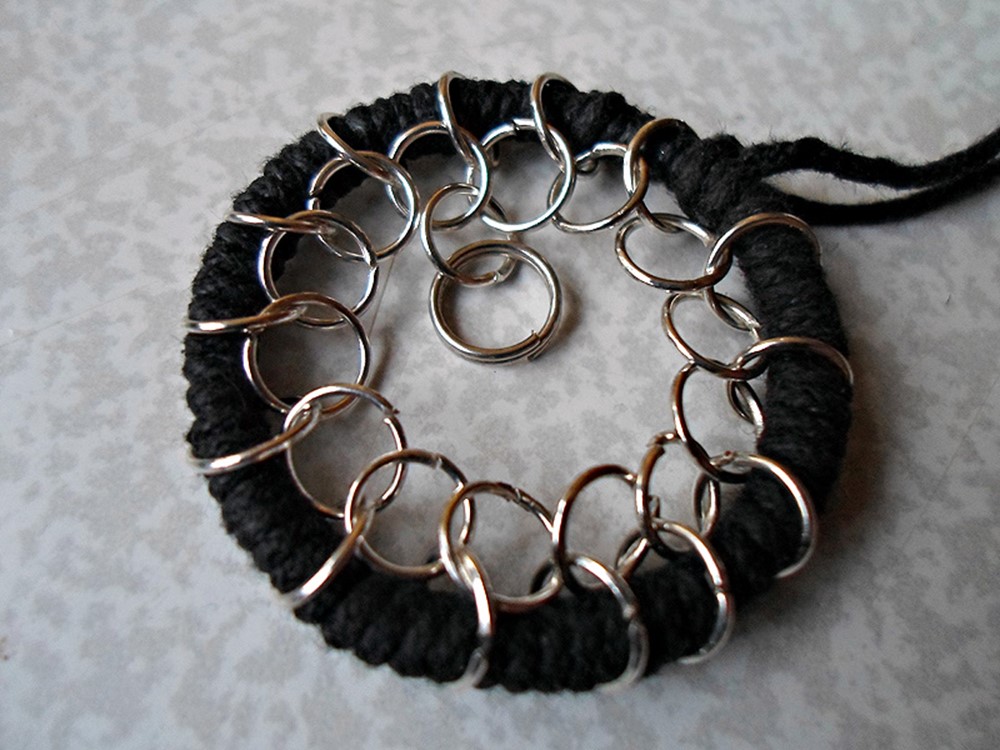 Connecting the one ring, do the same with the rest, it only remains unchanged the Central ring. 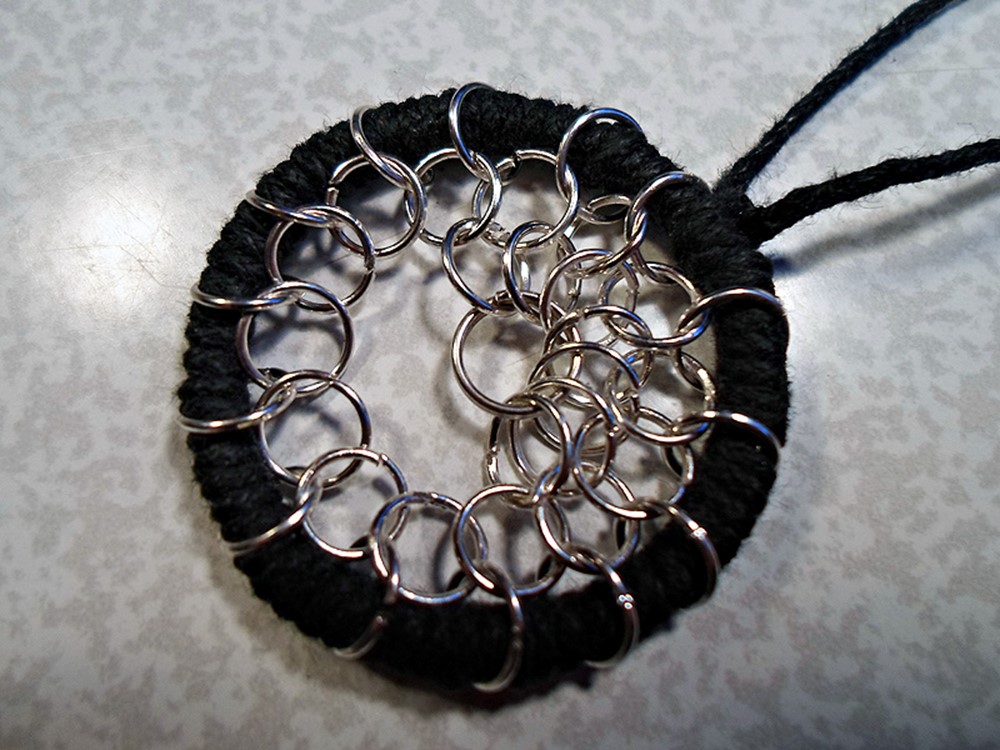 Maybe not the first time will succeed, so I advise you to be patient and not throw begun. Practice, each time will be faster, easier and without errors. The process is not as complicated as it first appears, and the result, of course, you will be pleased with. In the end should be perfectly symmetrical metal Spider Web.

Now let’s focus on accessories for pendant. In the node formed by cord stick the same another, but the shorter one, and make it to the end of the reverse side of the knot. This is the basis for three suspensions. 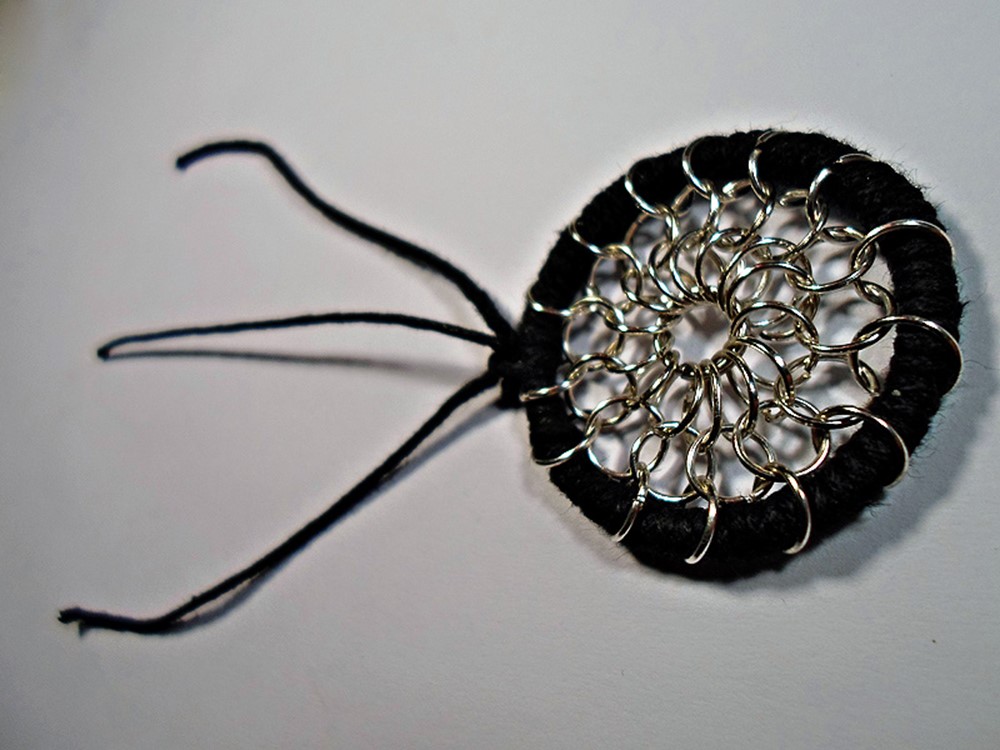 Take the metal feathers and fix the knot at the ends of the cord. 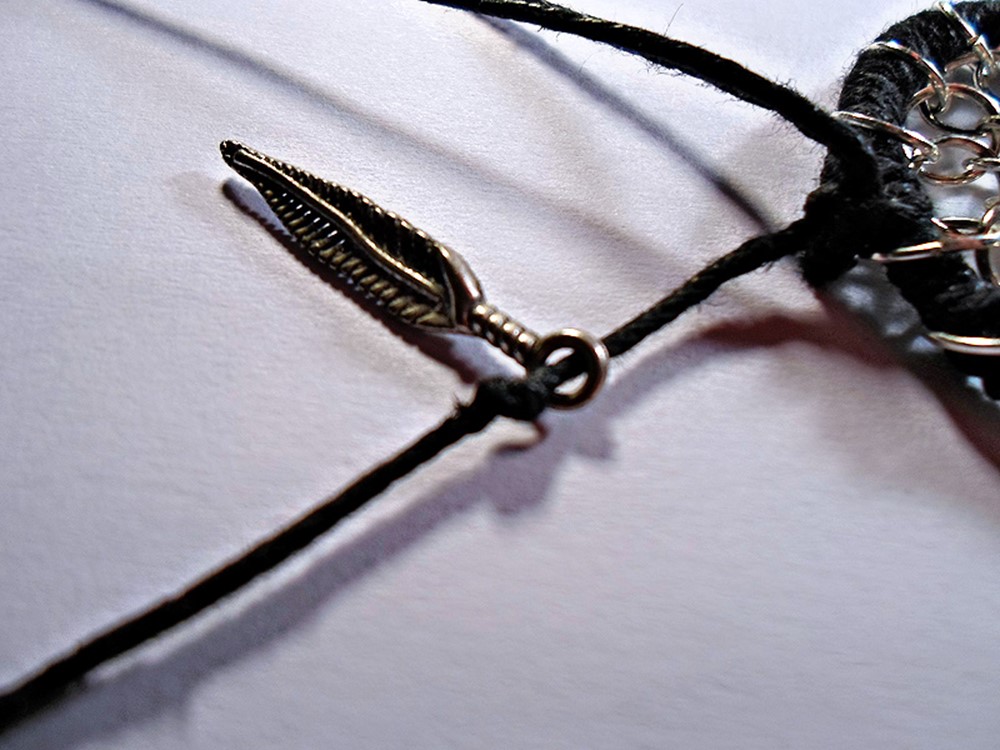 Two extreme feather are attached above, and you can omit the Central cord slightly below.

The metal ring of the first series, which is at the top, Center of the pendant, stick collar with attached to it metal holder with a beautiful pattern. 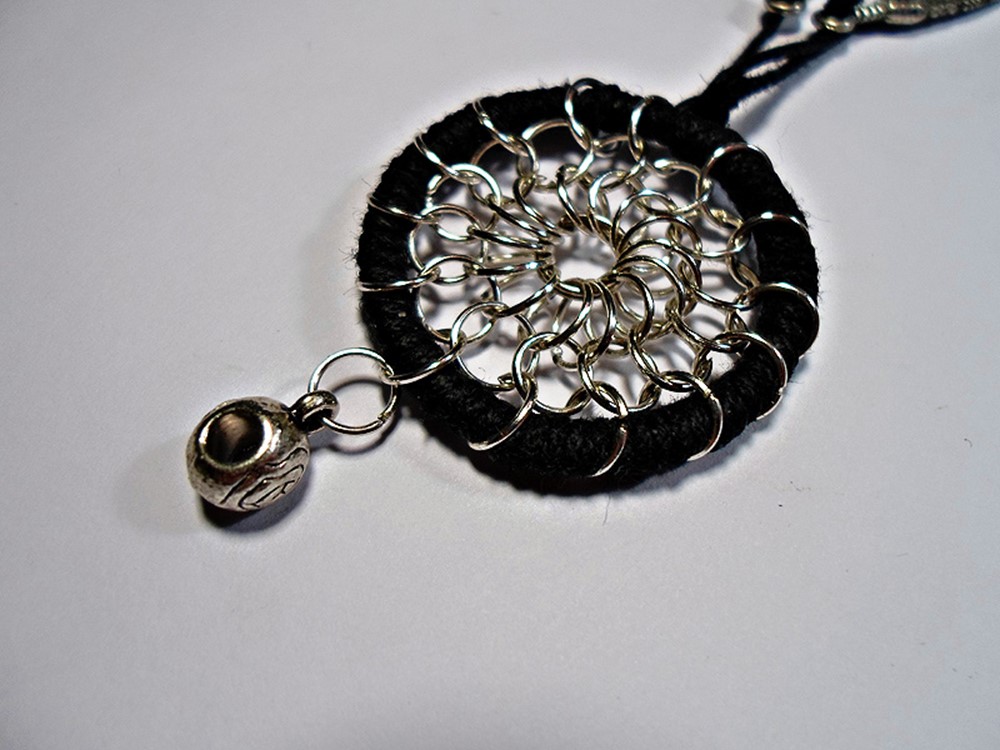 Through the metal holder with a beautiful pattern put his rubber cord and on either side of the Center enjoy accessorizing beads “Pandora”.

The ends of the rubber cord fix with special metal clips. 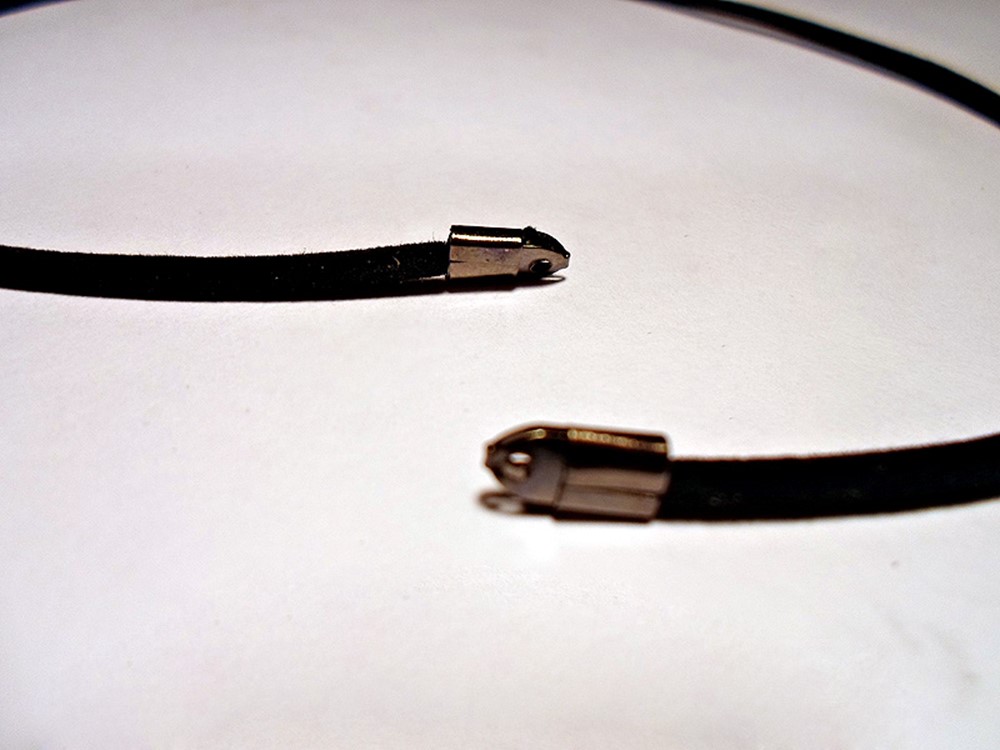 In each clip insert the dual ring mount is perfectly solid. 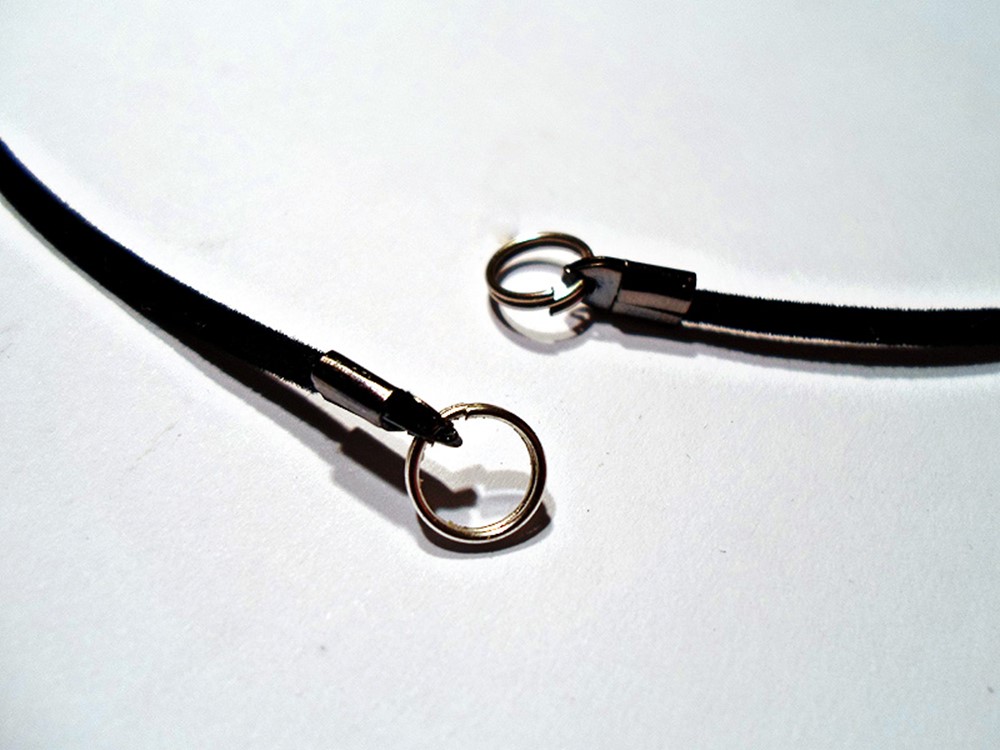 One of the rings fasten carbine. 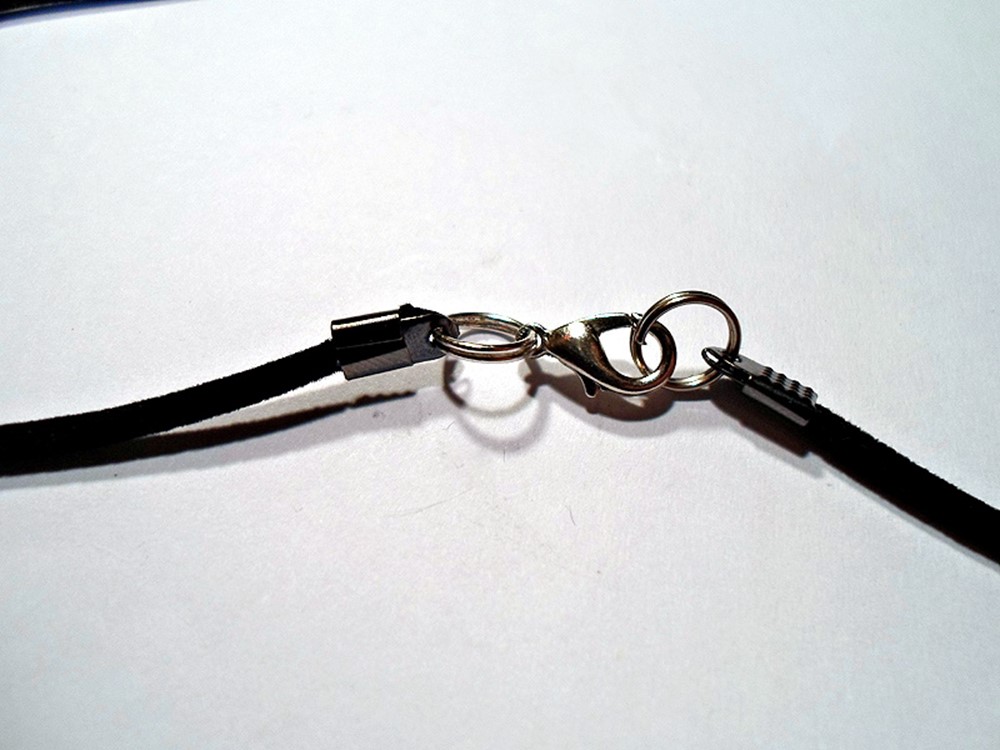 Turned out to be a very interesting and original pendant, which can be like your favorite costume jewelry and gift for somebody. 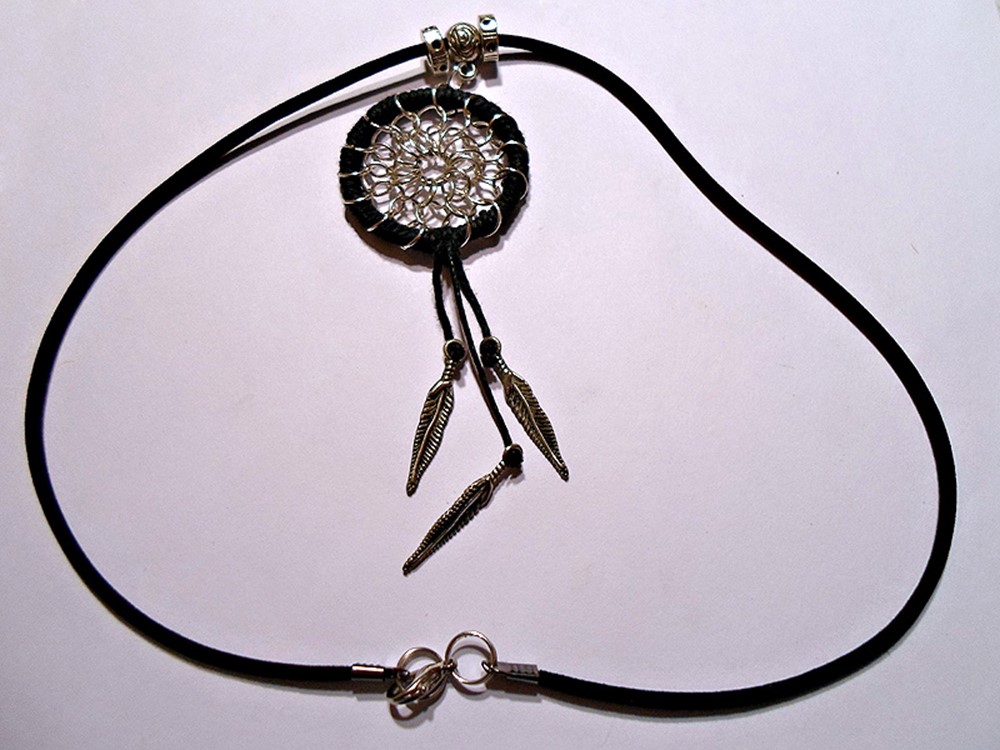