Storage of materials is a complex issue for craftswomen. You can do a few square baskets from veneer. They are functional and in addition these baskets look great. They can be used to store any materials and tools.
You can make a box out of cardboard by analogy with this technique. 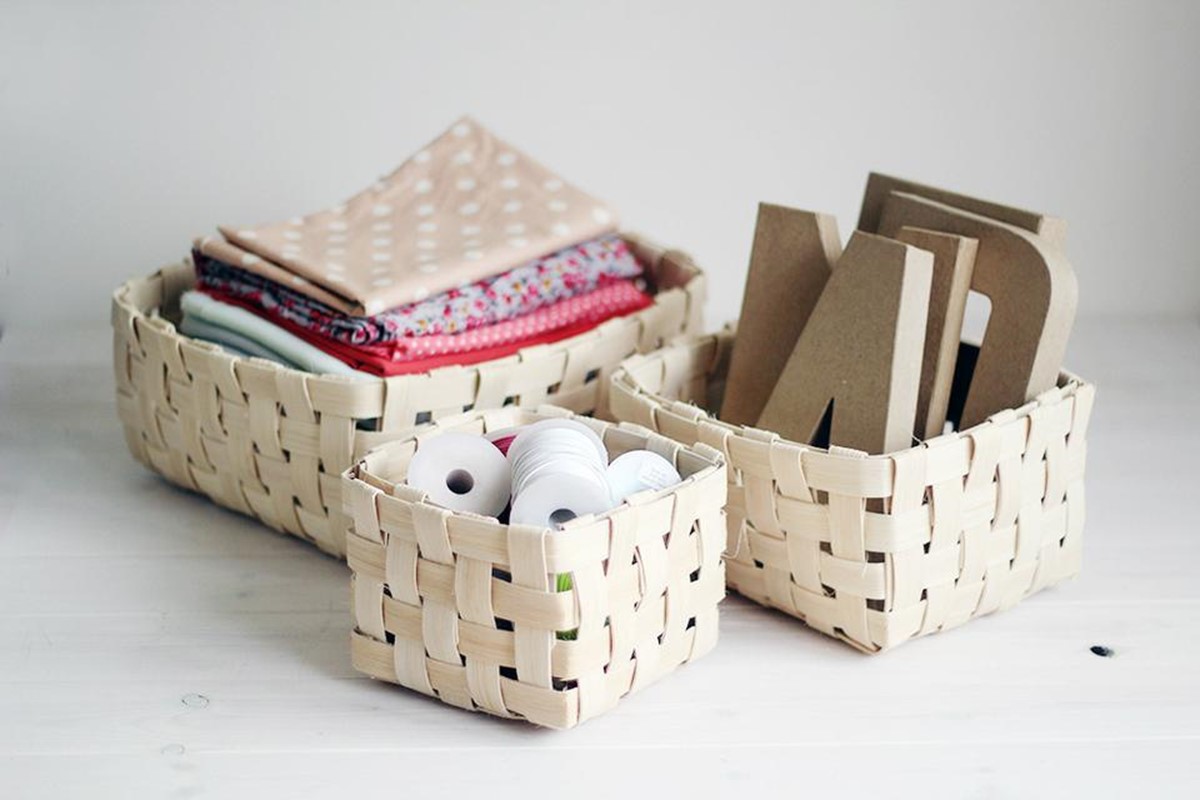 Materials and tools for weaving baskets:

Place the veneer in warm water for about an hour. Hang it in order to get rid of excess water.

When veneer surface will remain visible moisture cut strips of equal length. The length of the spike and the number of them will depend on the size of the basket.

It is important: the number of horizontal and vertical strips must necessarily be uneven.

We have used circuit 7 × 7 bars. The length of the strips of veneer depends on the height of sides of the basket.

Take half of harvested strips and lay them on the table, fixing tape, or pressing by heavy book. Try to imagine a square, which is formed when horizontal stripes laid on the vertical. Strips of adhesive tape should be placed along the sides of an imaginary square.

Woven into the first horizontal strip of veneer. Each strip is woven so that its edges are bent to you.

Woven into the next strip, using the classical scheme of weaving (if the previous horizontal strip is laid on top of the vertical, the following must pass under it).

Woven into all horizontal strips of veneer, in the central part you should have a square.

Check out which way is better to bend the veneer. In one way it can be bent to form a smooth bend and bend at the other side, veneer can exfoliate.

Turn the workpiece so that when the strips bend upward veneer is not divided into layers. Fold all the strips along the edges of the square using a metal ruler.

Align strips along one side of the square, and a long strip of woven veneer. The length should be such that the veneer enough for all four walls of our baskets. Do not forget about the classic scheme of weaving, and make sure that the long strip bends well in your favor.

Woven into two strips of veneer in the same way.

Fold all three strips along the intersection with the last of the vertical bands in which they are woven.

Woven into three long strips along the next side of the square. Pay special attention to weaving the corners.

Repeat the same operation with stripes along the third and fourth sides of the square.

Cut the remains of bands woven into baskets veneer wall, leaving a margin of about 2 inches. Woven bands in the left part of the wall, which wove first.

Baskets made of veneer takes shape. At this stage it is possible to weave in several wall strips to achieve the desired height.

Important: after netting walls must remain approximately 3 inches of strips from which wove the bottom of the basket. The free ends later will need to bend and weave into baskets.

Do this with all the outer vertical stripes. Thus, half the strips will not interwoven. Inside baskets, woven around the perimeter of the latter band, fix another segment veneer. This strip can be fastened with pegs.

Fold all the remaining vertical stripes on top of the fixed pegs rim and weaving them into the second from the top horizontal strip of veneer.

Cut vertical strips to length, so that they are not sticking out from under the horizontal.

The same technology can be used to make veneer basket of other size. For example 5×5 or 9×9 bands. You will immediately find them to good use.